If you read my last post, you know that the Occam's team spent most of 2018 racing the Farr 30 while Occam's is getting a make-over.

Unfortunately, the Farr 30 is just not that well suited to overnight racing, with minimal creature comforts below, and the new boat did not come with any of the requisite safety equipment.

So, rather than try to outfit KISS for overnight racing, we instead looked outside of the team for another ride for the annual Swiftsure Race out of Victoria.  Swiftsure has been a fixture in the PNW for a very long time, and 2018 marked the 75th running of the race, so we didn't want to miss out on the festivities.

Fortunately, one of the extended Occam's family happens to own his own race boat, and was looking for a crew to race it in Swiftsure.  So, in serendipitous turn, we quickly found a ride for all of the Occam's team that was interested in racing.

The boat that we were racing, while a pure race boat for it's time, could not be more different from Occam's.  Amazing Grace is a mid-80's vintage C&C 45 IOR war horse.  This boat has been there and done that, and participated in some of the biggest races of the late IOR era.  She is a lovely looking boat, that fortunately still sports her original colours and is easy to spot from miles away due to her red and white spinnakers.

So, after a couple of practice sails on English Bay, the crew set off to face all comers in the Cape Flattery Race at Swiftsure.

Conditions for the race this year were pretty much exactly as they advertise in the brochure.  Clear skies, moderate temperature, a fairly steady westerly wind.

The big tactical decision, as usual, was when to cross over to the American shore on the long beat out to Neah Bay.

But before we could get to that point, we did have to navigate the rather congested start line.


After the start, things were pretty easy as we worked out way to Race Rocks.  There was a commercial vessel which decided to make like interesting for the fleet, and take a rather westerly route from the Quarantine Buoy to Race Rocks that brought them right through the fleet.

After passing Race Passage, the wind piped up rather quickly, and we had to change down jibs a couple of times in rapid succession, which on this boat put quite a strain on the foredeck crew.

The downwind leg was pretty uneventful, and everyone had an enjoyable sail.

Although we prepared for it as much as we always do, for once, Race Rocks was not blowing like crazy as we came home.  In fact, it was no more than a couple of knots more than anywhere else.  So we had a fairly sedate and civilised transit through Race Passage, and then just had to watch out for the wind holes on the trip back in to the finish.


All in all, it was a great sail (and a decent result) for us on Amazing Grace.  And we want to thank Steven and Mary for taking our rag-tag bunch on board and making sure we didn't miss out on the fun!

This is the tale of what the Occam's Razor Race Team got up to in 2018 while Occam's is in the yard getting fixed up following loosing the rig in an unfortunate race collision.

In late 2017, the Occam's management set out to look for a fairly priced boat in a competitive fleet so that we could continue to sail while Occam's was in the shop.  Fairly quickly, we found a Farr 30 for sale in Nanaimo which had previously been part of the Vancouver Farr 30 fleet.

The boat was in good condition, although the sail wardrobe was a little tired and needed updating, so two weeks later, the deal was done, and the Occam's Team had a new toy.

The first order of business was to bring the boat to Vancouver, which involved a long motor in the cold, damp, and fog, which was a little more adventurous than necessary.

The second order of business was to come up with a new name for the boat.  A group of intrepid team members got together for a night of serious brainstorming (aka drinking) and thought of new names.  In the end, the best name was suggested by Grandpa Sprinkles.

Keeping with the theme of the team name the new boat is called KISS, which is short for "Keep It Simple Stupid" which is an alternate expression of Occam's Razor.


So, armed with a new name, and with new sails on order, it was time to get to learn the new boat.  On a rainy Saturday in January, the team got to take the new ride out for a spin.  And she certainly did not disappoint!

A couple of weeks later, we entered our first Polar Bear Race with the new boat.  It was a bit of an inauspicious affair, but it was good to get out racing and to see the Occam's Dragon flying! 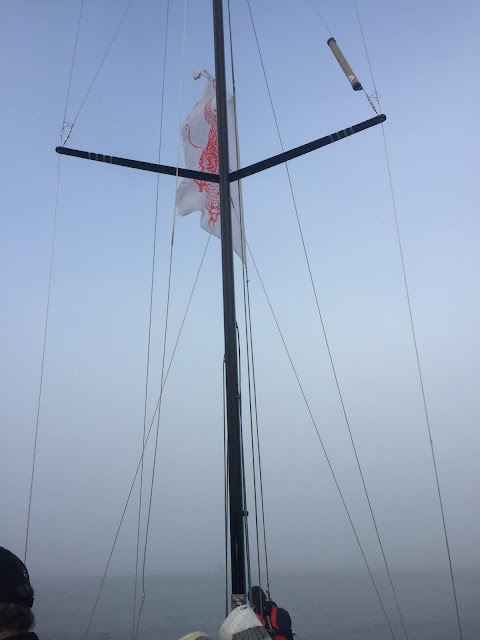 Two weeks later, we tried again, and had a better day on the water and were able to enjoy Vancouver winter sailing at its best. 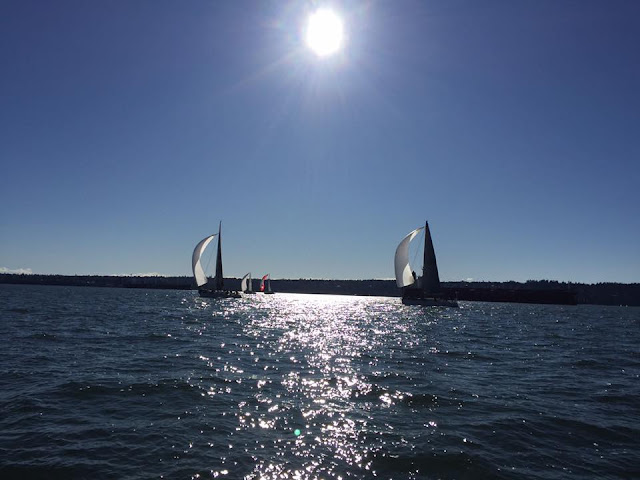 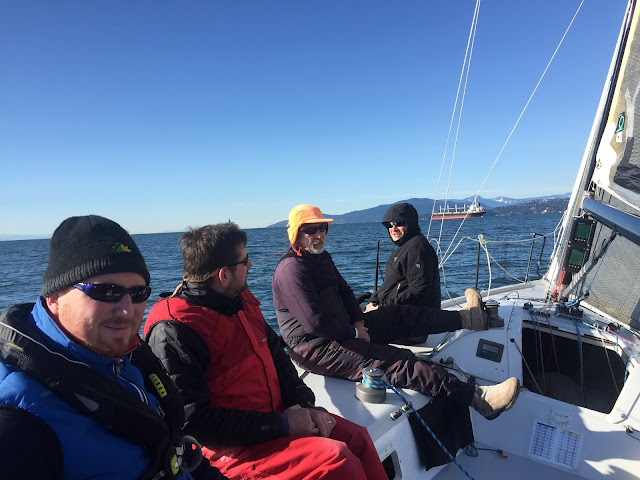 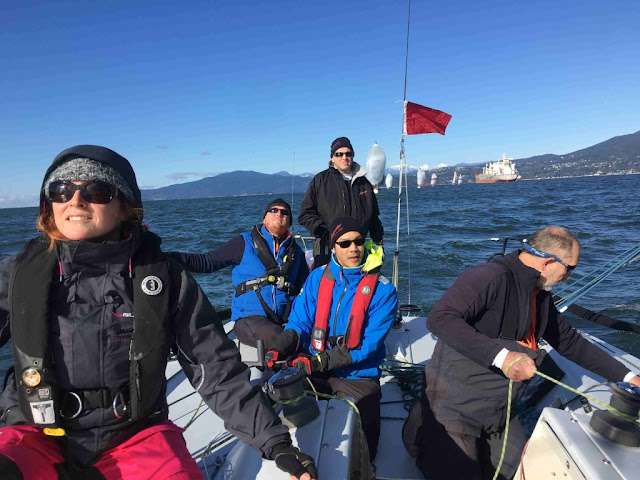 Through the rest of February and March, we continued to work on getting the boat and equipment up to specs, including more new sails, new lines and of course, the new name!

While we had been enjoying ourselves, and working hard to learn the new boat, up until now, we had not actually lined up against any other Farr 30's.

Our first chance came with the RVYC Day Race, which was a short distance race tour of English Bay.

The race started with a short beat up to the Kit's Barge Buoy, followed by a long run out to Passage Island.  Rounding the Barge Buoy, we were right up with the crowd, and the run to Passage saw all the Farrs grouped together for a long while.  We were very pleased to be in contact with the group all the way to Pt. Atkinson, but then we fell behind a bit.  Undeterred, we pressed on, and on the leg back in to RVYC from Passage, we made up some ground, and actually got ahead of one or two of the other Farrs.  We continued to gain ground in the dying breeze as the fleet headed out the the Bell Buoy, and passed another boat who went in a hole (and then another who ran aground on the way back to the finish off RVYC.).  In the end, we were the second Farr 30 to cross the line.  Unfortunately, due to an altercation on the course with of boat in a different division, we were later disqualified from the race.  But overall, we were pleased with our sailing for the day!

May One Design Regatta - Time for School

On the first weekend of May, we entered in the RVYC May One Design Regatta, which was a chance to line up against 4 other Farr 30's for two days of racing with 5 races per day, and no throw-outs.

That's a lot of racing, and we looked forward to our first chance for some real, tight, one-design racing.  With 5 boats in the fleet, most of whom had been racing Farr 30's for 5 seasons or more, we knew that our chances of doing well overall were slim, and we focused on learning the boat from some of the best sailors in Vancouver.

We spent 2 days chasing the fleet around, checking out the settings that were being used for jib and main trim, and doing our best to be in the mix.

In the end, we surpassed our expectations.  While we did finish last overall (of the boats that raced both days), we did have some success in individual races, with some very close finishes, and one second place finish late on the second day.

Overall, the team really enjoyed the one-design racing experience, and looked forward to the next event.


As long as I have been racing big boats in the Pacific Northwest (and that's a pretty LONG time!), the biggest regatta event of the year has been Whidbey Island Race Week, which happens in July just across the border in Oak Harbour, Whidbey Island.  While the event is smaller than it was in the '80's, and this year was actually reduced from 5 days of racing to just 4, it is still the best chance to get in several days of racing in great conditions, against the best sailors in the area.

We began the year optimistic that Race Week would be a one-design event for the Farr 30's, but ended up being 2 boats short of the number needed to get our own start, and ended up racing in the same Div 1 fleet that we have raced against in Occam's for the past several years.  So, the fleet was 4 Farr 30s (KISS, 65 Red Roses, Nefarious, Bat Out of Hell), Absolutely (Farr 39 ML), Shrek (ID35), Javelin (ID35 - Modified), and Wicked Wahine (Melges 32).

Overall, the conditions were quite light this year, with only one day where the wind gave us the reliable westerlies that we know and love at Race Week.  But the racing in the Farr fleet was close, with us enjoying several good legs where we were sailing right next to other Farrs and able to gauge our speed and point nicely.

As expected, the results show that we are still learning the boat, and that it's an uphill battle to crack into the standings in this fleet.  But overall, it was a great event (as usual), and we had fun as always.

It's been well over a year since this blog has been updated, and a LOT has happened!

And the first update is a picture of a boat that is NOT Occam's, sailing in a place that is NOT the Pacific Northwest.

So, I suppose you may be wondering what the heck is going on?

Well, a lot, and I promise to update the blog with some recounting of what has been going on.

For now, the picture above will have to serve as a bit of teaser.  But I can say that it was taken over the week of Jan 16-23 while several of the Occam's crew were in Barbados racing in very lovely conditions!